It all began in the 1950s when scientists thought that they had found the fountain of youth: antioxidants. At this time, we already knew about the “classic” antioxidants vitamins C and E and beta-carotene, molecules which neutralize these harmful chain-reaction-inducing, disease-causing agents. But then we discovered that there are thousands of antioxidants. Sweet, the more the better. Flavonols, stilbenes, coumarins, anthocyanidins. Oh, and there are also isoflavones, flavones, flavanones, flavanols … And they all declare war on free radicals!

Wait a minute, why would thousands different compounds all do the same thing? Well, they are antioxidants, some might say. They are anti free radicals which are otherwise known as reactive oxygen species. Anti-oxidants. Get it? It’s what they do.

But … this is not quite the case. “Antioxidants,” says Dr. Jeffrey Blumberg, Senior Scientist and Director in the Antioxidants Research Lab at the Jean Mayer USDA Human Nutrition Research Center on Aging, “are insufficiently defined by a single mechanism of action.” In fact, explains Dr. Angelo Azzi, visiting scientist at the neighboring Nutritional Immunology Lab, while all of these compounds may oxidize free radicals in a test tube, they often do not function as antioxidants in the body at all! Why not? Well first, we produce our own antioxidants, and the diet contributes only 5 to 10% more. Second, their activity often becomes blocked by other compounds as soon as they are absorbed. Third, they may even be eliminated from the body as foreign substances.

Oh. Well then. Can’t believe I just spent all that money on açai+pomegranate juice.

Wait, this just in: Good news. Antioxidants do have health benefits, but ironically many of these have little to do with free radicals. Read on.

7:45am
Nine o’clock class coming up, you go for oatmeal with apples and almonds as the breakfast of choice. Got your whole grain, fruit, and protein. Check. Being a proper nutrition student.

Antioxidant in oats: Avenanthramide suppresses proinflammatory cytokines, small signal molecules that cause inflammation, which is in turn associated with disease. They also affect the cell life cycle, which happens to be disregulated in cancer. Avenanthramide can potentially help to protect against cancer cell proliferation, according to Dr. Mohsen Meydani, Senior Scientist in the Vascular Biology Lab where this research is being carried out.

Apple: Flavanoids, the family of antioxidants prevalent in fruit, may participate in fighting free radicals both directly and indirectly. A subclass of polyphenols, flavanoids are adept at renewing the activities of the classic antioxidants vitamins C and E, and regulating the body’s production of antioxidants, according to Dr. Oliver Chen at the antioxidant lab.

Almonds: Vitamin E has been shown to reduce the duration of influenza in animal studies in the immunology lab. Elderly people who were given vitamin E supplements experienced fewer upper respiratory infections. Dr. Dayong Wu, who is exploring the mechanism of action, explains that fat-soluble vitamin E can insert itself into the membranes of immune T-cells to affect their signaling. Until recently, alpha-tocopherol was the primary form of vitamin E that was being researched. Now, Dr. Wu and his colleagues are actively exploring the potential of tocotrienol, a form that is found in palm oil. Thus far, they have seen that it is effectively absorbed and beneficial at very low concentrations in animals.

12:30pm
Lunch is the best time for leftovers. You buy a cup of green tea at Jaharis café and pull out your Tupperware: split pea and spinach curry (you were going Indian-food-inspired veggie when you cooked dinner last night).

Split peas: Isoflavones are found in large amounts in soy, but tofu isn’t for everybody, and split peas and beans contain isoflavones as well, albeit less. Dr. Chen explains that animal studies in the Antioxidants Research Lab have shown that isoflavones increase the number of energy-utilizing mitochondria in tissues, thus increasing the amount of energy that the body derives from fat stores.

Spinach: Lutein a type of carotenoid, is found in spinach and other leafies. Lutein is deposited in the retina of the eye, where it actually does act on free radicals. This is key because the retina also takes up polyunsaturated fatty acids such as the omega-3 DHA, which are prone to the generation of free radicals. Interestingly, both lutein and DHA are also taken up by the brain and affect cognitive function. One intervention study in the Carotenoids and Health Lab showed that elderly people given lutein supplements exhibited higher cognitive function, and that supplementing both lutein and DHA produced even better cognitive scores, explains Dr. Elizabeth Johnson.

Green tea and turmeric (in curry powder): Catechin and curcumin, respectively, have been shown affect the growth of new blood vessels says Dr. Meydani. This function has previously been applied to cancer research because tumors happen to require the growth of vessels. Now, scientists at the Vascular Biology Lab are actually exploring whether curcumin might block the growth of blood vessels to fat tissue as well. An animal study showed that mice fed a high fat diet with curcumin gained less weight than mice that received no curcumin. Now, the hypothesis that obese people on a calorie reduction diet plus curcumin will lose more weight than the control group with no curcumin is being explored.

5:15pm
Finally finished with class for the day, you stop by the Copley farmers market on the way home to pick up some purple carrots. Simply because they look cool and you want to explore whether or not they will change color upon cooking, similarly to the purple equivalent of green beans (which disappointingly turn green).

Purple carrots: Falcarinol is found in high levels in purple carrots in addition to the renowned beta carotene, which you’ve heard is in the orange ones. Dr. M. Meydani and his colleagues have shown that falcarinol reduces the number of colon cancer polyps in animal studies.

6:00pm
You get home, and your neighbors are having a barbecue! You already know that the soy veggie burger contains isoflavones, but you also grab some red pepper skewers and corn on the cob.

Red pepper: Vitamin C may affect bone health. When she analyzed epidemiologic data from the Framingham Osteoporosis Study for her PhD thesis, Shivani Sahni, working with Dr. Katherine Tucker of the Dietary Assessment Unit, found that people with high levels of vitamin C in their diets had much lower rates of hip fracture in old age.

Corn: Zeaxanthin, another carotenoid, is found in the retina along with lutein. It also acts on free radicals and helps to prevent macular degeneration. Lutein and zeaxanthin are typically grouped together in dietary databases, but this is problematic because they occupy discrete areas of the retina and have distinct functions. To allow for separate analysis in the diet, Dr. Elizabeth Johnson and Dr. Katherine Tucker joined forces to write a paper which broke down the quantities of zeaxanthin and carotenoid in the top 80 foods in the American diet, and applied these quantities to analyzing data from the National Health and Nutrition Examination Survey.

8:30pm
After the beers at the barbecue, you and your neighbors decide to step it up in classiness and go out for a glass of wine (this is turning into a fun day). 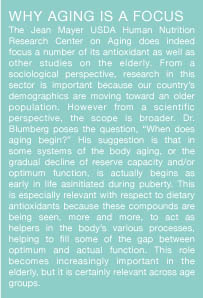 Wine: Resveratrol has been the protagonist of many health claims and studies are still being conducted, but you would have to drink about twelve bottles of red wine to consume only 2mg of resveratrol, elucidates Dr. Chen. Dr. Blumberg suggests, “If resveratrol turns out to be only 10% as promising as people think it is, well, I don’t know that I want to encourage everyone to drink lots of red wine – even though I try to follow that advice myself – but maybe I would want to put it into something like a breakfast cereal.”

And we can drink wine. We’re all about making up excuses.

The verdict on antioxidant intake and antioxidant research? Who knows. New functions are perpetually being discovered by researchers at the HNRCA and around the world. The consensus from the HNRCA seems to be that the focus seems to be on functions other than the neutralization of free radicals. That there is not one superfood and the antioxidant capacity rankings reflect what happens in vitro, and fail to capture bioavailability and biological action. Diet variety, as always, is key. “Science is like this,” articulates Dr. Azzi. “There is not only one single truth, but you approach reality from different positions.”

0 comments on “Your Day in Antioxidants”