The clouds cleared just in time for the sun to break through to the tips of the 100-plus vendor tents lining the Fort Point Channel. The first-ever Boston Local Food Festival (BLFF) was off to a sunny start, despite some initial hurdles. 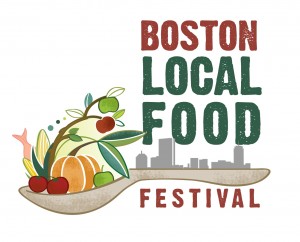 Although planning for the festival had begun many months before October 2nd, zoning issues led to some last-minute changes. Most notably, the loss of the Congress Street Bridge due to permit restrictions caused vendor locations and demo stations to be re-mapped during the wee hours of the morning. The Boston Children’s Museum came through with additional space for tents and children’s activities, allowing the festival a little more breathing room.

The idea for a local food festival was born out of the belief that local food should be accessible to all, regardless of geography or income. The festival had set out to prove a number of things: that there is a market for local food in Boston, that there are restaurants with local options in the city and surrounding areas, and that eating local doesn’t have to mean exceeding your budget.

The first goal was easily surpassed as local food advocates, college students, city residents and fortunate passers-by wandered into the festival starting as early as 10am, eager to sample the freshest bites from the many restaurants and vendors. Predictions for festival attendees hovered around 20,000 people, but a packed boardwalk pushed final estimates of attendees to over 30,000.

It was quite clear during the festival that restaurants and food vendors have heard the call of the local, and that they have been listening. Over 100 vendors were featured, including 3 Little Figs, Blue Heron Organic Farm, Daily Catch (who also hosted a beer tasting), Sportello, Four Star Farms, and M&M Ribs, to name a few. Restaurants and vendors learned, if they did not already know, that there is a market for local food in Boston, and that people are willing to travel to find it.

To demonstrate the affordability of eating local, almost nothing at the festival cost more than $5 per serving (with a few exceptions for seafood dishes). The festival drew attendees from various socioeconomic backgrounds and attracted a diverse array of restaurants and vendors from Boston neighborhoods.

An additional benefit of the BLFF was the show of the community support for local food initiatives. Almost 200 volunteers donated their time to help vendors set up, staff information booths, monitor recycling stations, and clean up around the hungry and often very messy masses. Volunteers met in-person once a month leading up to the festival date and again early on the day of the event to ensure everything ran smoothly. Volunteers ranged from supporters of the Sustainable Business Network (who sponsored the festival), to community members to college students. The Friedman School was well represented in both volunteers and attendees of the festival. Kitchen Thinkers sponsored the Stir a Memory art project that encouraged festivalgoers to share their favorite food memories, rekindling the connection between food and culture. Food memories are available to read on the Stir a Memory blog.

Not only was the festival able to demonstrate the demand for good, local, food and its affordability, it did so while going GREEN! To encourage overall environmental health, organizers enacted a Zero Waste policy. Zero Waste goes beyond recycling to minimize overall waste and reduce consumption. A Zero Waste event is one that has 90% of waste recycled, reduced, or reused and strives to have the least amount of impact on the environment. To qualify for this designation, forks, spoons, and plates used were all biodegradable and the festival itself distributed very few printed materials. Even though the festival worked with Save That Stuff, a leading Zero Waste company, it still came up slightly short of the 90% threshold- with Zero Waste estimates around 76%. This can most likely be attributed to vendors or attendees who brought their own plates or utensils that did not adhere to zero waste guidelines.

The inaugural BLFF sought to act as a conduit for local food seekers to connect with local food providers, under the sun, along the river, with live music and entertainment. They set lofty goals indeed, but all involved put their best foot forward. I can’t wait to see what next year’s festival will have to offer.

Meghan Johnson is a first-year FPAN student with a specialization in Health & Nutrition Communication. She relocated to Boston from Washington DC and is doing her best to acclimate to the lingo, the bitter winds, and clam chowder.