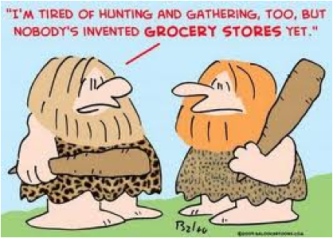 Six of the top seven causes of death in America are significantly impacted by diet and lifestyle.  However, there still exist small societies where such problems are rare.  In his 1939 book Nutrition and Physical Degeneration, Dr. Weston Price (a dentist by trade) noted the remarkable health of those who consumed indigenous diets free of “white man’s foods” like flour, sugar, white rice, and vegetable oils.  Contrary to Price’s Cleveland, OH patients, “primitives” from pole to pole were virtually unaffected by our biggest killers.  While most nutrition research ventured into low-fat and low-carbohydrate diets, some took a further interest in Price’s observations.  Sifting through fossil and climate records, scientists established dietary patterns of the Paleolithic humans (who lived approximately 2.5 million to 10,000 years ago).  This data helped researchers understand how food and culture shaped (or selected for) the human genome during our evolution.  Among the most notable of these scientists is Professor Loren Cordain, author of peer-reviewed manuscripts and books including The Paleo Diet.

The diet encourages readers to consume the foods we ate before concentrated agriculture appeared, about 10,000 years ago.  The eminent scientist Stephen Jay Gould stated:

“There’s been no biological change in humans in 40,000 or 50,000 years. Everything we call culture and civilization we’ve built with the same body and brain.”

Cordain hypothesizes if our genome hasn’t changed then we should still be eating the foods with which we co-evolved and eventually thrived.  Paleo foods are:

The following staples of agrarian societies are notably absent:

Few experts would eschew the message of no processed foods, lots of fibrous vegetables, and naturally pastured/wild animal products.  Moreover, recently introduced foods (including processed plant oils) offer a radically new set of challenges to the body’s physiology.  Since 1909 (just 4 generations), North American plant oil consumption has increased ~500%.  Current rates of chronic disease suggest we’re not yet up to the task of handling “new” foods.

The biggest controversy with The Paleo Diet is the elimination of grains, dairy, and legumes.  Epidemiological evidence suggests people who eat whole grains and legumes live longer, healthier lives.  This would appear to contradict the purported health benefits of the Paleo diet.  However, the disharmony is largely resolved in light of a few important observations.  First, epidemiological surveys compare diets rich in whole grains and legumes to diets even higher in processed foods, not lower as Paleo promotes.  Second, the surveys which support whole grains use unreliable tools to collect food data and poorly control for significant health factors like exercise.  Third, studies reveal grains, potatoes, and legumes are comparatively rich in deleterious components.  Among them are:

In essence, epidemiological evidence does not currently have the capacity to compare grain-rich and grain-free diets because these processed foods are consumed in such great abundance.  Where epidemiology has fallen short, a few small Paleo-type intervention trials better addressed the whole grain/legume critiques (follow links).  Human and animal studies indicated Paleo-type eating significantly improved:

Contrast these results with a well-conducted 2008 study that fed participants either whole or refined grains for 12 weeks.  Whole grains were superior to refined grains in only two of 29 biomarkers examined.  Those who ate refined grains ironically showed bigger drops in blood pressure, weight, and waistline.  The authors note:

“Whole-grain foods are recommended for prevention of CVD because they contain many cardioprotective compounds, including dietary fiber, trace minerals, phytoestrogens, and antioxidants.”

Dairy has health implications that include casein lectins and an exaggerated insulin response.  This is true for both whole and skim milk.  There have also been dairy-free diet interventions to treat Autism.  For further exploration of the principles, watch this exhaustive video.  While Paleo has some science behind it, the diet has drawbacks.

It’s not possible to eat identically to our hominid ancestors.  Anyone who has seen wild blueberries understands our current cultivars are a far cry from those of 100,000 years ago.  Weston A. Price did manage to find Paleo-type diets in healthy modern populations.  However, once those peoples became exposed to modern culture they invariably delighted in its delicacies.  So maybe the problem is that modern foods are very enticing, engineered to contain the fat, salt, and sugar combination we all crave.  The Paleo diet is hard to adhere to, with restaurants and parties being particularly troublesome.  One can usually find a high-protein salad but that invariably becomes dull.  It’s often said the best diet is one which people are likely to follow.  Paleo probably fails this test.

Of greater concern, the Paleo diet lies distinctly at odds with the reality of earth’s population.  Estimates indicate the U.S. wouldn’t grow enough produce if every American decided to follow the “eat 5 a day” program, let alone a Paleo diet.  The entire world population feeding on organic produce and pastured animals requires an unimaginable devotion of land and labor, plus redistribution of population centers.  And even if concentrated agriculture has worsened our health, hasn’t it accelerated our culture?  Without the ability to feed many people with grains, our entire civilization (not to mention this computer), is doubtful to have arisen.  I have yet to see these issues adequately addressed by Paleo advocates.

On a scientific level, our genome may have been stable since the Paleolithic era but the field of epigenetics has proven our DNA structure to be malleable.  Environmental factors like diet and pollution can change which genes are expressed within a single generation.  Further, early hominids had far more physical activity than current humans.  Is diet the only health-related variable to have changed with the advent of agriculture?  Certainly not.  Parsing out those factors is a vague exercise at best.  Paleo advocates must understand the industrialized world will never approach their ancestors’ activity levels.

The diet makes little exception for vegetarians.  While Paleo has science and history to claim health benefits, many vegetarians eat for ethical or religious reasons.  Cordain should better address this population.  The Paleo diet will also put a hit on your wallet and lies out of reach for most people.  Grains cost less per calorie while organic and pastured products command premium prices.  Americans already skimp on nutritious foods in favor of economic savings.  So even if they have the discipline, few can afford to eat this way.

In general, Paleo is poorly characterized and often confused with Atkins.  Countless blogs contain advocates and detractors.  Unfortunately, there is a paucity of funded science researching the concepts.  While this may owe to our grain centrism, common sense and several studies support Cordain’s approach.  Our food culture is set up around central processed grains and their oils.  Chemical- and petroleum-dependent networks sustain cheap calories with massive health and environmental costs.  The current system opposes our 2+ million years of evolution but is it the only way to feed the world’s population?  Paleo is difficult to follow, expensive, and restrictive.  However, if people so choose it represents a paradigm to bring ancient health and food back to the future.

Max Prokopy is a first-year Biochemical and Molecular Nutrition PhD student who has certifications and experience with training collegiate and professional athletes with a particular focus on ice hockey.

0 comments on “Back to the Future: Is the Paleo Diet for Real?”