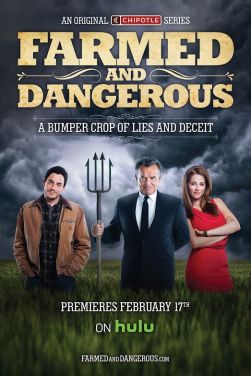 Being the so-informed-it’s-sometimes-annoying types that we Friedmanites are, you probably already discovered/facebook posted/tweeted/told your mom about Chipotle’s new sitcom, Farmed and Dangerous.  In the case that I’ve caught you before this hits Buzzfeed, Farmed and Dangerous is a new satirical series featuring a villain (big, industrial agriculture) and the hilarity that ensues when cattle–erm–explode.  The series prods and sizzles the popular faults of industrial ag, including the industry’s dependence on fossil fuels and overuse of antibiotics on livestock.

Chipotle, however, is not about stamping their names on the idea of sustainable ag—it’s unclear whether the “Chipotle” name is ever actually mentioned during the series, and they do not appear in the show credits.  Daniel Rosenberg, a production studio partner, calls this type of advertising “strategic entertainment”.  Rather than the blatant online ads that we’ve learned to leave unregistered and the TV commercials that we fast-forward, Chipotle gently nudges a receptive audience towards its brand message.  While it’s not explicitly “The Chipotle Show,” Farmed and Dangerous will be available to watch on a Chipotle-branded Hulu account, and its main character is named “Chip”.

This subtle (or not-so-subtle, depending on how popular you consider the name “Chip” to currently be) marketing approach is gaining momentum, but Chipotle is by no means the true pioneer.  Circa 1950, food products like Ovaltine were promoted in shows watched by their target audiences.  Given this information, I’ll give you one guess as to how “soap operas” earned that nickname.  Neal Burns, a professor of advertising at the University of Texas, calls the method “appropriate for our times” and says of the show, “It’s going to help establish a sense of fondness and that eating there is the right thing for me to do.”  Indeed, Chipotle execs have described the stealth marketing strategy as “values integration” rather than “product integration”.

So, at three paragraphs in, is your mouth watering yet?  Are you thinking about Chipotle’s soupy sour cream and oh-so-sustainable carnitas?  Or are you like me, still a sucker for Willie Nelson crooning “I’m goin’ back to the start” as cute pigs are restored to their outdoor pastures in the 2011 commercial?  Click the video below to see the trailer for Farmed and Dangerous–and please do let me know if you feel your values integrating.

Meg Keegan is a second-year AFE and WSSS student whose mortal enemy is the commercial beef industry–she plans to take it down by bow and arrow. Meg can be reached at megan.keegan@tufts.edu.

0 comments on “Farmed and Dangerous: Get the beef about Chipotle’s new sitcom”