Soylent is nothing new, and this is not the first article, but it may be the first to take a practical look beyond the gimmick. Soylent is for people!

Lovingly named after the movie Soylent Green about a post-apocalyptic world without food. Yes, Soylent could help you survive an apocalypse, so you can avoid eating people. Ironic, huh? It’s not a silver bullet for recovering food addicts or those looking to ditch eating altogether. Yes, you can live on Soylent, but should you? There’s no research on Soylent, so the jury is still out. The opinion of Soylent does not have to be as cut and dried as its form. There are plenty of uses for it! Let’s explore them together.

Soylent is not alone, but at $1.54 a meal, it might be the cheapest. The World Health Organization has been developing similar items for years for nutrition assistance. Hospitals routinely use liquid nutrition products for patients unable to eat. The marketplace is saturated with brands like Raw Meal, Boost, Ensure, and Slimfast. Soylent is just the newest edition and fashionably late.

First be warned! Soylent is not your sugar-sweetened pudding-flavored 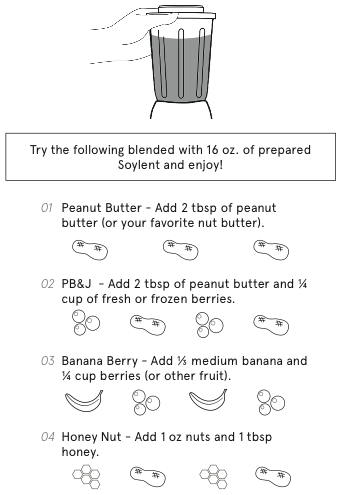 predecessors. It tastes like, well, nothing. Not the same as the sought after Soylent cookie in the movie. The second formulation does have improved taste and texture. The website even has smoothie suggestions (shown right). Think of it as a blank slate to create whatever flavors you want. Then just scoop and add water. If nutrition is what you seek, the first formulation focuses more on health than on palatability. It might be worth taking a look, but be careful. Some consumers reported side effects….

Average Joe said it best in his comment titled “Is she the one?” on Amazon reviews: “Soylent gives you the kind of gas that is absolutely perfect for stress-testing your marriage. If you aren’t sure about whether your wife truly loves you or not, Soylent WILL give you an answer”.

We have established that Soylent is not people. Do you know what else Soylent is not? It’s not jam-packed with fruits and vegetables either. Gasp! Then what is it? The powder is a compilation of 40% fat, 45% carbohydrates, and 15% protein. Personally, I wish it were higher in protein and lower in fat. One great thing about Soylent is that it is open sourced, which means you can create and customize your own version! Then again, if you have no time to cook, are you really going to DIY a supplement? Besides time, Soylent saves money, reduces food waste, is lightweight, and has a long shelf life. I have also read it makes a decent stain remover.

The fats in Soylent are canola and sunflower oil. The carbohydrates are oats and isomaltulose, a slower absorbing sugar substitute. The proteins come from rice flour and the whole thing is fortified with vitamins and minerals to meet the RDAs. Can a person live on canola, sunflower, oats, sugar, and rice? The creator Rob Rhinehart says he has been doing it for years! I have found Soylent useful this semester, but I only add a scoop to “flesh” out my smoothies. I find Soylent very filling. It’s an easy way to stay satiated at school without having to prepare and pack much food. Still, are the ingredients healthy?

The beta glucans in oats lower cholesterol levels and isomaltulose does not cause cavities. Brown rice flour is a complete source of protein, containing all nine essential amino acids. The overall protein content is comparable to soy and whey. A friend of mine adds whey protein to his Soylent for strength training. He is in his cut phase, supplementing two meals a day with Soylent to track calories with great success. He finds his version of Soylent to be a nice post exercise meal for quick nutrition within the hour window of replenishing glycogen. Could Soylent be the new chocolate milk?

The first two ingredients in Soylent are canola and sunflower oil. The good news is these fats are high in omega-3 fats that reduce the risk of cardiovascular disease. The downside is that such a large amount of fat could cause digestive problems. Probably why they ditched the flaxseed oil in the first version, or why Average Joe had so much gas. “Fat content is most often the culprit of digestive issues,” says Dr. Kathrina Prelack, Director of Clinical Nutrition at Shriners Hospital. She explains that liquid nutrition used in the hospital has high medium chain fatty acids to prevent distress. These fats are absorbed more easily than long chains. Soylent lacks these and may cause discomfort.

Another problem is lack of fiber. Women should get 25 g, and men should have a whopping 38 g every day. Soylent has a measly 3 g of fiber per serving, not even adding up to half of what a person needs in a day. Still, this may be a lot more fiber than some people get. In 2010, over 90% of Americans were not getting enough. Maybe this is why our friend Average Joe was having issues…This writer has had no issues and neither has my friend.

Soylent also lacks phytonutrients. These are protective chemicals in plants shown to have health benefits. There are many known phytonutrients, such as flavanols in chocolate and lycopene in tomatoes, with more to be discovered, but supplementing them may not be the answer. Eating foods in their entirety has shown to have better health benefits than consuming the same processed versions. The ingredients in Soylent do have health benefits, but they are incomplete. The real issue here is variety. Soylent limits the diet to just a few foods, and it may be missing other things the body needs from whole foods.

Nutrition aside, eating also involves time, cost, planning, and preparation. Why else would Soylent become so popular? Last year, Soylent made $10 million in profits. Soylent may not be the nutritional quick fix, or the end of food, but it can help. You may not want to stop eating, but why not take advantage of this new product? It’s working for Rob Rhinehart, for busy moms, and the Silicon Valley industry. It’s working for my friend and me.

Soylent has a lot of potential. For instance, this lightweight, calorically dense powder is a hiker’s dream! It might also displace the canned goods you have stored in your bunker. The frequent traveler might want to toss a bag of Soylent in their suitcase as a backup. Truck drivers could do wonders for their heath switching to Soylent if they currently survive on diner food. Plenty of people are scarfing down pizza, burgers, subs, and fries right now. Surely, Soylent is a better choice.

0 comments on “Not Another Soylent Article?! Get the Real Scoop on This Cheap Powder”