It is almost the end of the fall semester, finals are upon us, and Friedman students are eagerly awaiting winter break. But that didn’t stop contributors to the Sprout from bringing in a wide variety of articles to keep you occupied until the next Sprout (February 2016!).

This month was a big one for The Friedman School. In school news, Michelle Borges and David Grist give us a run down of what Friedman Student Council have been doing this semester.  The Friedman Justice League has drafted a vision statement for the future of the school. Finally, Hannah Packman interviews Friedman faculty on how they eat.

Next up, Kathleen Nay explores the group DINE, Dig In! Nutrition Education, and explains how Friedman students are making a difference, one third-grade class at a time. Are you stressed about finals? Marissa Donovan thinks you need some puppies, stat.

In other science news, scientists claimed to have discovered a fourth type of diabetes? Shannon Dubois has the story on their breakthrough, and whether it can really be called a “discovery” at all. Then take a look at Katelyn Castro’s article debunking 6 common diabetes myths. People are very misinformed on the topic and Katelyn clears up points of contention.

On the policy front, people have been concerned with what’s happening with the soda tax in Mexico? Did it work? Has it been repealed? Ally Gallop takes us through the process. Emily Nink takes a look at what strategies should be emphasized to prevent and reduce food waste.

Looking for new foods to try?  Michelle Pearson has tried and enjoyed the edgy meal replacement Soylent. Nusheen Orandi looks at the potential for seaweed as a source for essential nutrients. And Lindsay LaJoie talks about life growing up on a farm that grows blue potatoes.

Are you tired of nutrition science headlines blown way out of proportion? So is Matt Moore. He looks at some of the more egregious nutrition headlines that have hit the internet in the past year.

Do your New Year’s resolutions revolve around working on your fitness? Katie Mark explores the new fitness fad, boxing, and its surprising proponents. And finally, Mireille Najjar offers some nutrition-based tips for staying healthy this winter.

Good luck on finals and have a great holiday from your editors,

by Michelle Borges with David Grist

Hello from your Friedman Student Council! Despite our best efforts to communicate through all available channels, we often hear from students that they don’t know what student council does. Naturally, the Sprout seemed like an ideal place to post a summary of our activities so far this year.

Visions for a Just and Equitable Nutrition School

by The Friedman Justice League

This is an exciting time in the history of the Friedman School. Dean Mozaffarian has undertaken a school-wide strategic planning process, open to all levels of the school body. Albeit executed under a tight time frame, staff, faculty, and students are being given the unique opportunity to consider in-depth what makes Friedman great and how we can continue to make it even better.

What to Eat? It Depends Who You Ask 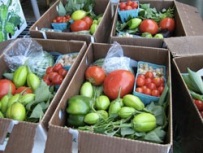 The question of what to eat perplexes many Americans. We’re constantly barraged by conflicting dietary advice, much of which does not fit within our personal preferences or cultural practices. To help navigate this rocky territory, seven Friedman professors offer their take on the matter.

Since 2006, the Friedman School’s Agriculture, Food and Environment students have partnered with the third grade classes at Josiah Quincy Elementary School to explore the benefits of garden-based learning. Dig In! Nutrition Education (DINE) is a curriculum designed to get kids excited about food while simultaneously fulfilling Massachusetts’ school science standards. This fall, both AFE students and the third graders enjoyed learning about the food system and nutrition together.

This time of year is hectic, the end of the semester is near, but the workload to get there seems daunting. Consider turning to animals to fight your finals-induced stress with Tufts Institute for Human-Animal Interaction and Tufts Paws for People.

Fish are a fabulous source of many nutrients, including omega-3 fatty acids. 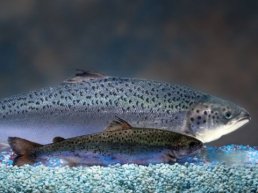 Growing popular demand has strained the limits of commercial fishing. Farmed fish help meet the growing need, but this system still has a significant environmental impact. Working towards the goal of increasing aquaculture efficiency, Massachusetts-based AquaBounty has created the AquaAdvantage®salmon, the first genetically-modified (GM) animal approved by the FDA for sale and consumption.

Is There a Fourth Type of Diabetes?

We all know about diabetes: the infamous enemy of our bodies’ blood glucose homeostasis; the delicate balancing act between insulin and glucagon to keep our blood sugar stable. Type 1 and type 2 diabetes are the most well-known and talked about, type 3 was brought to the table a few years ago, and type 4 has just been “discovered.” So, what is this newest type of diabetes, and should we be worried?

by Katelyn Castro
Diabetes. Sugar. Insulin. Shots. You’ve probably heard of diabetes before, but unless you or someone close to you has diabetes, the media may have warped your perception of the disease. About one in ten Americans has diabetes, yet there are still many stereotypes surrounding the disease.

Coca-Colonization in Mexico: The Soda Tax That Almost Wasn’t

A year ago, I praised the Mexican government’s seminal 10% soda and 8% junk food taxes, which took effect January 1, 2014. The result? Soda consumption dropped by 6% and bottled water consumption increased by 4%. Yet nearly two years later, relentless soda lobbyists tried to cut the tax in half. Did you hear about that?

To prevent food waste, strategies should examine both social and environmental outcomes at all stages of the food recovery hierarchy, avoiding using food insecurity as a convenient rhetoric while protecting a culture of wasteful overconsumption.

Not Another Soylent Article?!

Soylent is nothing new, and this is not the first article, but it may be the first to take a practical look beyond the gimmick. Soylent is for people!

Edible Seaweed: An Ancient Vegetable from the Sea

We call it an exotic “health food” now, but edible seaweed became part of the world’s cuisine thousands of years ago and still remains a normal kitchen ingredient in many parts of the world. Why should we pay more attention to the stuff that gets stuck in between our toes at the beach? While western chefs and foodies play catch-up to the rest of the world by switching up their vegetable dishes, nutrition scientists say seaweed offers health benefits. Perhaps both contribute to why U.S markets are starting to make room for this sea vegetable on grocery shelves.

Growing up on a family farm meant changing roles with the seasons, and changing with the times.

Stop with the Clickbait, You So-Called Muckrakers

Dim the lights. Cue the music. Turn it up. Stare down your opponent: a black, 100-pound bag hanging from a chain. Slip your wrapped hands into the gloves. Lift both hands up against your face. Jab, jab, cross. Hit. That. Shit.

Boost Your Immune System with These Foods and Nutrients

The much-dreaded cold and flu season is upon us. To keep your immune system running strong, include these 6 immunity boosters in your diet. Plus make sure to wash your hands, drink plenty of water, and get enough sleep too.