Cuisine en Locale was first established in 2005 as a locavore catering and personal chef service. The company moved to 156 Highland Avenue in Somerville and began hosting events in February 2014. Apart from sitting blocks away from my apartment, I was anxious to check out this restaurant because of its mission: to partner with local farmers and bakeries to source all of its ingredients from within Massachusetts. The result? Delicious, fresh food. Drawn by both the eclectic, friendly atmosphere and the great menu, Cuisine en Locale attracts a diverse crowd that makes this lounge and bar a fun place to hang out, get a taco and a locally-brewed cider, and catch up with friends.

As Bill Hader’s infamous Saturday Night Live character Stefon the “City Correspondent” would say, this place has everything: board games, a jukebox, live music, vapers, goths, interpretive dancers, an old TV playing static with the specials written on the screen, and plain families of four.

As you walk in the doors, you are greeted by three chandeliers and mirror-written signs guiding you toward the restaurant and lounge. Up the stairs there are two pool tables, a dance floor, tables and chairs, and a bar at the far end of the enormous space Cuisine en Locale calls home. Next to the jukebox you will find ample board games like Sequence and Connect Four to play while you sip your delicious whisky sour! The adjoining music lounge, called ONCE, was deemed 2016’s “Best of the New” by the Boston Globe. The antithesis of mainstream, the music you will hear ranges from brass bands to experimental rock.

My favorite part? Pool tables with ample space, no wait time to play, and only $1 per game!

The events of the week start with Taco Monday (because Taco Tuesday is so cliché) and Metal Tuesday (serving pizza), with DJs and regular dinner menus Thursday through Saturday, 5pm to 10pm (bar is open ‘til 1am). With vegetarian, vegan and meat-lover options, depending on availability, the fare is well-suited for its sundry audience at reasonable prices. 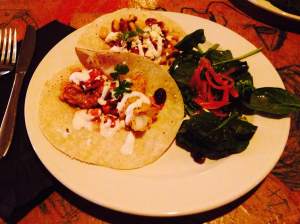 The fish taco was the favorite of the table on Taco Monday: Hake on a corn tortilla with a sage and cranberry sauce and topped with a few sprigs of cilantro that tasted as if they were just plucked from the garden. We also tried the yellow-eyed pea and corn taco, as well as the lamb. Each $4 taco came with a side of spinach topped with pickled onions (which sounds odd, but it was SO good).

The service overall was laid-back, but attentive. Everyone who worked there was very welcoming and friendly—the bartender even made me a whisky sour without the “sour.” The scribbled-on tables and low-budget chairs did not make for the most appealing eating atmosphere, but continued the chill, relaxed vibe.

The Thursday before, my boyfriend and I moseyed down the street for their once a month special DJ event. The cover was $3, and we enjoyed playing three rounds of pool while listening to anything from the artists’ original mashups with weird vocals to the Beatles. I found the crowd refreshingly different; looking around the room I spotted top hats, rainbow hair, Goths and steam punkers mixed in with us boringly dressed folks. While this may not be appealing to some, I love places that allow people to be and come as they are. 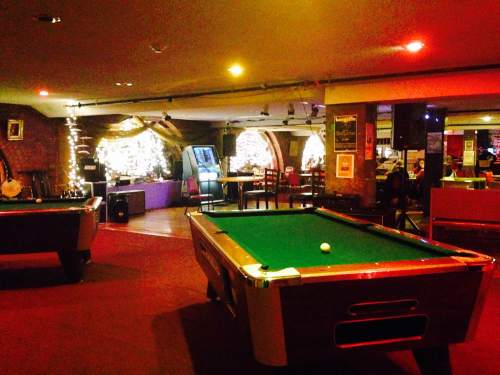 Overall, the atmosphere was fun and off-beat, and the food tasted great. If you ever find yourself in the Somerville bar void between Porter and Union Square hit up Cuisine en Locale for an interesting time. For you sports fans out there that want to watch the game on 10 different TV screens, this probably isn’t the place for you…

Micaela Young is a first-year student in the Nutrition Communication program with a concentration in Agriculture, Food & Environment. While she is a homebody who LOVES to cook, she does enjoy having a nice stranger serve her a stiff drink and a yummy taco every once in a while.