The year is 2014. I’m about to cook my Paleo breakfast, made up of foods that my ancestors would have eaten. And just as my hunter-gatherer ancestors did thousands of years ago, I pull out my $400 Kitchen Aid, fire up my gas stove, and whip up some “Paleo” pancakes. I mean, I used 100% pure maple syrup and nut flour, so it falls within the Paleo rules, right?

Fast forward to 2016. Technically, I’ve been an (unsuccessful) practicing Paleo for a couple years, filling in the gaps of my hunter-gather diet with Greek yogurt, whole-wheat bread, and the occasional good beer (totally worth it). So, while I personally haven’t chosen to follow this extremely clean eating lifestyle to the T (I found it hard to work into my busy, social routine), I still follow many of Paleo’s core tenants and will faithfully argue in its favor as a scientifically-backed way to improve a range of health disparities.

Before I go into that, however, here’s a quick recap of the Paleo diet for those who need a refresher. Paleo really isn’t a diet, but rather a full lifestyle change; and a pretty hefty initial change at that. Those who wish for miraculous weight loss or the option of mindlessly eating pre-packaged meals need not apply. Paleo requires commitment, focus, and a lot of planning.

Founded by the notion that humans live and perform at their best when eating unprocessed and whole foods, Paleo centers around vegetables, meat, healthy fats, and some fruit and nuts. Most convenience foods do not fit the bill. Nor do fast foods, sugary drinks, candy, bagels, etc. Basically, if it grew from the ground or eats stuff that grows on the ground, then it’s Paleo. Not all followers insist on the “caveman” origins of Paleo however. I often have to remind critics of that.

Being a Friedman Masters student, I often find myself engaged in conversation with a Paleo critic or skeptic who contends that eating this way is just a fad, is too meat-heavy, or is “dangerously restrictive.” Again, I fully disclose that I found 100% Paleo to be too difficult for my current lifestyle, but I remind the naysayers that by incorporating at least a part of the Paleo guidelines into your lifestyle can have a huge impact on one’s health, according to many dietitians and many people who ha 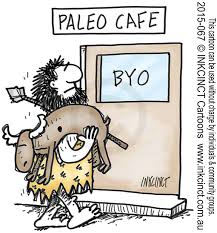 ve eaten this way. Alene Baronian, MS, RDN, founder of Eat 2 Perform, said in a blog post that although 100% Paleo can be hard to sustain in the long term, “eating more Paleo-like would be beneficial to a large population of the U.S. We need to eat more whole foods and eliminate all the processed items going into our bodies and following a Paleo way of eating assists with doing that.”

Therefore, in regards to what a “Paleo way of eating” actually is, pancakes made from densely caloric nut flour doused in pure maple syrup is absolutely not the point of Paleo (sorry, 2014 self).

In fact, I had the opportunity to have some first-hand lessons on this topic myself. The creator of the popular book, The Paleo Diet, Dr. Loren Cordain, happens to have been the professor of my Evolutionary Basis for Health and Fitness class at Colorado State University. In that class, we discussed the myriad of ways Paleo-style eating is preferable to the “Western Diet.” We discussed how dark leafy vegetables can be a preferable calcium source to dairy, in addition to their high content of Vitamin K and other bone-building nutrients. It’s also not that uncommon for many people to stay away from dairy for cultural or intolerance reasons, and they manage just fine. We learned that eating grass-fed beef is typically lower in calories and higher in vitamins than feedlot beef. Therefore making just these two diet changes, for example, can positively impact your health without requiring you to alter your entire diet forever.

In all honesty, I shouldn’t have to explain or justify what I choose to eat to anyone (nor should you). But for me, the positives of including Paleo-type foods have outweighed the occasional negative criticism I receive. And really, if my part-time Paleo eating motives are simply to include more whole foods, more nutritious vegetables, and less refined sugars, how can anyone argue against that?

Melissa Hudec is a graduating Nutrition Communications Masters student pursuing a job in public relations in Boston. She can’t wait to share her knowledge about Paleo with a new cohort.

0 comments on “Protein and Peppers: The Positives of Part-time Paleo”