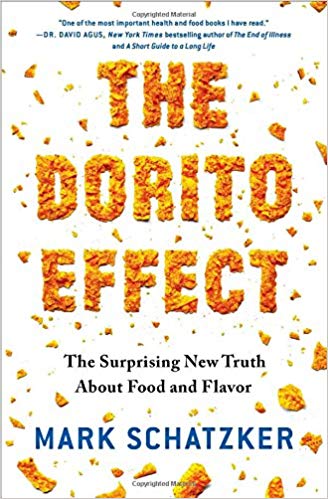 Grocery store shelves are teeming with products that cater to every sense of flavor. New flavor combinations seem to appear out of thin air every day. Even meat and produce sections increasingly offer pre-seasoned and flavor-enhanced options. What happened to real flavor, and what does all of this have to do with the obesity epidemic? Mark Schatzker, a New York Times food journalist, hypothesizes the connection is stronger than cayenne pepper.

Published in 2015 and riding the wave of other big name titles in food journalism (The Omnivore’s Dilemma, Food Politics, and Soda Politics, to name a few), The Dorito Effect takes a similar investigational look at the food industry, with author Mark Schatzker aiming to reveal just how much we, as consumers, don’t know about what we’re eating. In The Dorito Effect, Schatzker introduces the current state of emergency regarding obesity by detailing, in quite intimate (and condescending) detail, the despair a woman named Jean Nidtech felt about her weight and her relationship with food that led her to found what is now Weight Watchers. I’m not sure how he knew Nidtech had “visions of jelly beans […] dancing in her head,” but the picture he paints is one arguing that the biggest problem with obesity is an addiction to, or an obsession with, junk food.

Despite this sweeping generalization, Schatzker does illuminate the discrepancy between Americans’ obsession with fad diets and diet foods alongside obesity’s continued rise in prevalence. He notes that we have flip-flopped between villains du jour for decades (is it the salt or the sugar that’s slowly killing you today?). We invent reformulated food products to champion this “food danger,” but have yet to turn the dial on the burden of obesity. Through Schatzker’s reasoning, something in our food environment has certainly changed, but we have taken too reductionist of an approach in addressing it. Food is complicated, he aptly admits. As “we keep mistaking the mechanism of obesity for the cause” (eating too many calories), we dig ourselves deeper into a hole filled with a surplus of nutrient-poor, flavor enhanced, unsatisfying and addicting junk food.

Schatzker summarizes what is common knowledge for many in the Friedman community—our agricultural system, by primarily emphasizing production capacity and ignoring taste, has vastly reduced the nutritional quality and flavor of plant and animal products. The nutrients and plant “secondary compounds”—bioactives as you may know them—are really what constitutes flavor in food in its natural state. He argues that our senses were developed to recognize the various flavors and aromas inherent to particular foods, and that we are “wired” to want foods that fulfill particular physiological needs within our bodies.

Citing a Utah State Professor’s experiments with goats, who developed aversions to plants with toxins and learned to prefer flavors associated with nutrients in which they were deficient, Schatzker concludes that if humans interacted with food in the same way—choosing to eat particular types of plants based on the nutritional demands of the body—obesity would not be the epidemic it is today. We have confused ourselves, he claims, by ridding our food supply of plant secondary compounds, thereby stripping it of flavor and handicapping our innate ability to recognize key qualities and self-regulate our nutrition. Instead, according to Schatzker, we never get full from manufactured, flavor-added products because they don’t truly fulfill their purpose. We keep eating and eating and have ultimately found ourselves in the deep pit of an obesity epidemic.

The idea that our bodies innately respond to our food environment is a convincing hypothesis that has some scientific backing. For one thing, it’s long been accepted that humans have this same kind of post-ingestive feedback for high-calorie foods because we evolved to seek out foods with the most energy density. Schaztker dug up a study conducted by a pediatrician in the 1920’s, who fostered 15 babies and let them grow up eating whatever they wanted from a list of 34 foods (including potatoes, corn, barley, carrots, peaches and brains… among others) and found that these babies were excellent at adopting balanced diets and choosing foods to meet their needs as they changed over time. One baby with rickets, Schaztker recounts, drank cod liver oil in varying amounts over the course of his illness until he was better.

In a brief search of the literature, I failed to find similar studies to back this up. But this may be due to the increased ethical considerations of involving humans in experimental studies over a lack of effect.

Being realistic, the type of food exposure created by the dedicated pediatrician in the 20’s isn’t what most people in the 21st century experience. We live within cultures valuing food norms and are subjected to unbridled media influence. Schatzker would argue that the relationship between nutrients and flavors has been adulterated by the twin forces of the dwindling nutritional quality of our food supply and the abundance of synthetic flavor enhancements we now associate more with meeting emotional needs than biological ones.

Schatzker goes on to spend an inordinate amount of time oscillating between revering the flavor industry for its chemical ingenious and condemning it for perpetuating the disconnect between nutrition and flavor. His sometimes unrefined writing style blames both the overweight individual (often identifying her as “fat” so-and-so) and the food system at large for failing to reverse obesity. Though he does a good job of addressing the complexity of the association between food, flavor and nutrition, he stops short of identifying other key issues that cannot be overlooked when confronting obesity. Financial instability, social inequality, food policy and availability, and cultural norms among the larger issues, with emotional and psychological influences also playing a huge role in what food ends up on individual and family tables.

Schatzker’s grand resolution at the end of the book is to entrust food technology with the task of bringing us back to foods with flavors true to their nutrient content. He believes that if food technology can harness genetic modification to improve yield and durability, surely it can modify genes that enhance nutrient quality. While certainly a good idea, will genetically modifying food to be more nutritious reverse obesity on its own? Hardly.

It will be up to experts like us to dig deeper, and tackle each level of the complex food system with the Friedman understanding that everything is connected, everything is important.

Hannah Meier is a first-year, second-semester NUTCOM student, registered dietitian, and food lover enamored with the complexity of the food system and the way individuals interact with it. Reading The Dorito Effect had no impact on her liberal use of herbs and spices in the kitchen.