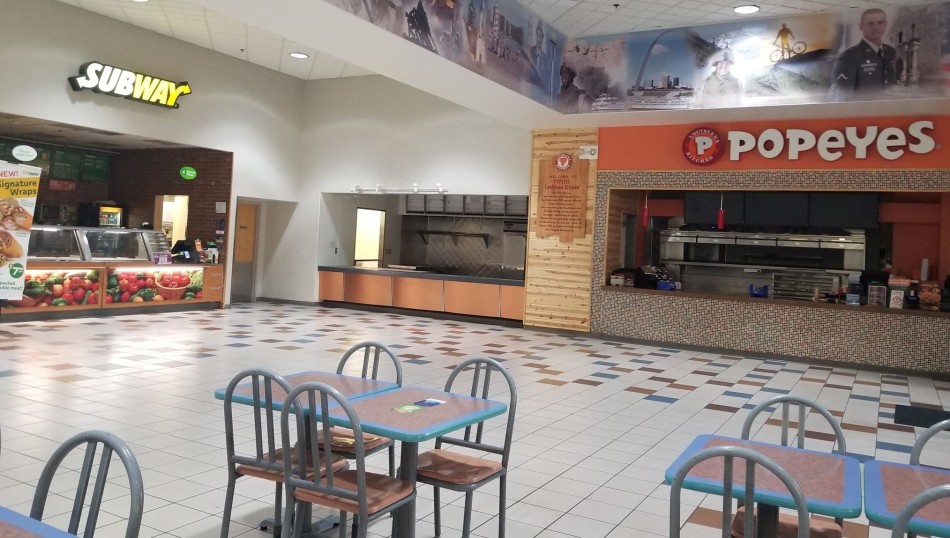 Obesity rates in the U.S. military have been increasing for decades. Sam Jones interviews Daphne Warlamis, a recent UEP grad, about her research and experience with food provision options on U.S. military bases, where fast food dominates, and fresh, healthy options are sparse.

The obesity rate among U.S. adults has increased dramatically since the 1980s, reaching 40% by 2016. The increased prevalence of fast food and processed food as well as more sedentary lifestyles are all well-known factors contributing to this epidemic. These statistics vary greatly among states, regions, gender, age, and ethnic demographics, with rates of obesity being the highest among Hispanics and non-Hispanic blacks and in the southeastern region of the United States.

A subset of the U.S. population that has yet to be included in the conversation about obesity is active and non-active members of the U.S. military. Rates of overweight and obesity in active duty personnel rose more than 60% between 1995 and 2008, with obesity rates at high as 18.3% in 2012. Numbers vary, but nearly two thirds of active duty are classed as overweight by Tricare, the primary healthcare provider for Department of Defense (DOD) personnel. Obesity rates are significantly higher for non-active duty service members, with rates as high as 33%. One probable explanation for the increasing overweight and obesity rates among service members is the limited food provision options available on U.S. military bases around the world.

Daphne Warlamis spent two years working as a DOD contractor on a U.S. military base in the U.K. During her time as a command program manager for the U.S. Air Force, she noticed the poor food provision options available to our country’s armed forces. As a recent graduate of the Master of Public Policy program in the Department of Urban and Environmental Planning at Tufts University, Warlamis used her experiences with the military to inform her final research project. She spoke with many active-duty service members, recruiters, and other personnel about their experiences with food and nutrition while on U.S. military bases.

Most U.S. military bases around the world play host to several big fast food conglomerates such as Burger King, Taco Bell, Pizza Hut, Baskin Robins, Subway, and the occasional Popeye’s. Subway is widely considered to be the healthiest fast food option on these bases. While conducting her research, Warlamis found that the fast food restaurants located on these bases are in contractual agreements with the DOD and the Army & Air Force Exchange Service (AAFES). A food vendor “like Taco Bell or Burger King is represented by a federal contractor who makes a bid to the federal government, which renews the contract because they are given a good deal,” either because “they are the cheap ones, or they are so well established on these bases that it is basically impossible for the government not to renew their contracts,” Warlamis explains. Burger King has been on U.S. installations since 1984. One concern she has from her experience in the federal contracting industry is that the federal government might fear the possible negative ramifications of rejecting a contract renewal with any one of these fast food titans.

Active duty members, along with their spouses and children, live on these bases for the majority of their service period. As of 2012, an estimated 16.7% of children and adolescents who are dependents of military members are obese, indicating that this issue stretches far beyond the military population themselves. Other than fast food restaurants, service members and their families can eat at the buffet-style food court, acquire provisions at snack bars stocked with donuts and packages foods, or shop at the commissary, or grocery store, which is open 5 or 6 days a week and usually closes by 6:00 or 7:00 in the evening. These limited hours do not cater to service members working off-shifts from 11 p.m. to 8 a.m., leaving them to eat heavily processed foods found at the snack bar or fast food restaurants that stay open late. Of the many U.S. military bases Warlamis has visited across the country, not one had a healthy food option open 24/7.

Because reliable access to healthy food options is limited, U.S. military bases could be considered food deserts. In fact, service members “are sometimes stuck on base. From an Air Force perspective, the young airmen, for their first three years, live entirely on the base and some of them do not have cars, so they cannot get off base. Their dorm rooms are only installed with a microwave, so they can at best eat processed frozen food, but most likely they will just eat Burger King.” Community kitchens exist in dorms, some with a stovetop, but 18 to 23-year-olds do not necessarily have the knowledge nor the time to fix a healthy meal for themselves.

In most cases, however, U.S. military bases can be referred to as semi-closed installations, meaning that while members may leave and re-enter occasionally, these installations are intended as complete living and working environments, replete with housing, gas stations, schools, hospitals, and food establishments. Additionally, leaving the base is only possible by car and passing through security upon re-entrance takes time. With only 45 minutes for lunch, service members do not have, nor want to spend, their limited free time driving and passing through checkpoints. As a result, they are primarily left to choose from the options available on base.

There have been efforts to improve food provision on U.S. military bases, although very few of them stick. Stanly McChrystal, a now-retired U.S. Army general and Commander of American forces in Afghanistan, was a staunch proponent of getting healthier foods on military bases and nutrition labeling programs have been implemented for on-base food options since the 1990s. However, as with most fast food nutrition labeling initiatives, little change in health status and food choice has been made as a result. While working on the Air Force base in the U.K., Warlamis observed that the commander put forth a successful initiative to get a food truck to come onto the base once a week. The same was accomplished on a base in Alaska, albeit a food truck providing fried halibut, which Warlamis notes was “local, at least.”

The question we must then ask is, how is this going to change and who is responsible? According to Warlamis, “you have the dichotomy between having, on the one hand, very stringent fitness requirements and regulations for military personnel to be in shape and deployable worldwide. They need to not only be physically in shape but also mentally stable. Then imagine you eat Pizza Hut or McDonalds every day. You are not physically in shape and you are not mentally stable.” Being that these are semi-closed installations and “many service members do not have the time or means to drive off base, the responsibility to address the obesity issue within the U.S. military cannot lie solely on the individual to make better food choices,” Warlamis adds.

One of the requirements for service members is that they must pass an annual or biannual fitness evaluation, which failing multiple times can result in being discharged from the military. Although service members of the U.S. military account for roughly 1% of the U.S. population, defense and homeland security account for over 16% of the total annual federal budget (as of 2015). With hundreds of billions of dollars in the U.S. Armed Forces annual budget, it begs the question, why is there not a priority placed on enabling service members to maintain a healthy weight and remain physically fit, per their service requirements? Meeting these basic physical requirements is not only important for deployment preparedness, but also for mental health and stability in the short- and long-term. The effects are even visible far beyond a member’s time in service. As in 2014, the VA estimated that 78% of Veterans are overweight or obese.

These men and women are tasked with defending our country. They make countless sacrifices to do so. With the mental and physical stresses placed upon members of the U.S. military, finding nutritious food should not be added to their list of worries. Our federal government owes it to them to provide nutritious food programs on every military base, not as a side salad, but as the main course. Whether food provision on military bases comes from the DOD, civil society, Congress, or the military members themselves, the fact remains that feeding our troops fast food is unjust and deserves our attention.

Sam Jones is a second-year AFE student and the co-editor of The Friedman Sprout. She is currently interning in the Public Relations department of the Tufts Boston campus and occasionally writes for Culture Magazine. She is interested in studying international agricultural development and pursuing communications and journalism throughout her career.

1 comment on “A Call to Arms: How Food Provision on U.S. Military Bases Increases Obesity in Service Members”