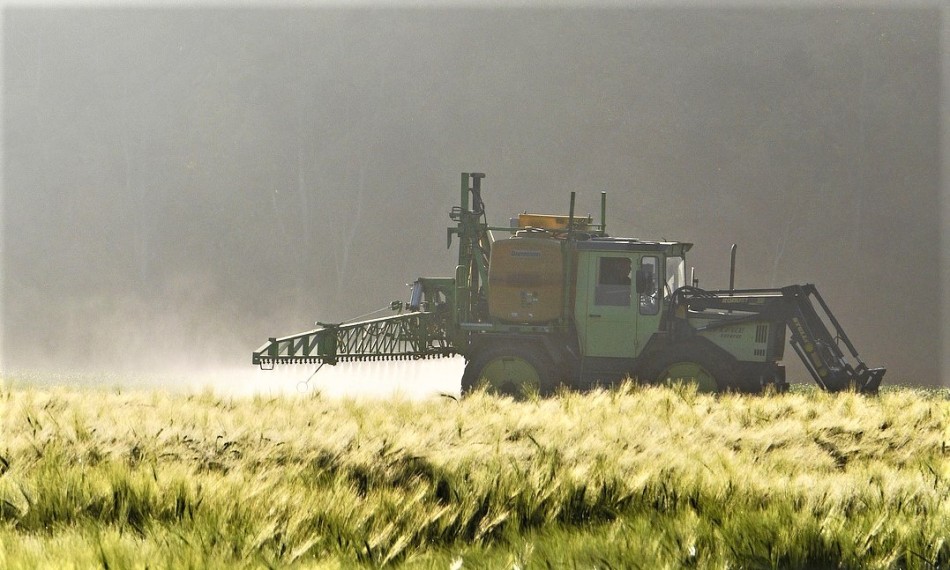 Some say glyphosate causes cancer while others deny any causal relationship. This in-depth exposé of one of our country’s most controversial pesticides weeds through the science and offers suggestions for action.

289 million dollars. That’s the amount DeWayne “Lee” Johnson won in a San Francisco court case brought against agrochemical company Monsanto this past August. Diagnosed with non-Hodgkin’s lymphoma over a year ago, Johnson now has less than six months to live, which the jury ruled is because of a chemical compound called glyphosate.

Glyphosate has been used as an herbicide to kill unwanted weeds since 1974 and can currently be found in more than 750 products. Johnson worked as a public-school groundskeeper and claimed in court to have applied tens of thousands of pounds of two Monsanto-made herbicides, Roundup and Ranger Pro, every year. Glyphosate is the main active ingredient in these products. In 2014, it is estimated that 26 million pounds of glyphosate were used for non-agricultural purposes like landscaping, public recreation area management, and jobs like Johnson’s. However, that 26 million accounted for less than 10 percent of total glyphosate use in the U.S. that year (Benbrook 2016). The other 90 percent was used in agriculture, with application rates increasing 300-fold from 1974 to 2014 (Benbrook 2016).

The rapid adoption of glyphosate, among other pesticides, can be largely explained by the equally rapid proliferation of crop seeds genetically engineered to be glyphosate-resistant. The most well-known of these include all Roundup-Ready crops which, when sprayed with the Roundup herbicide, do not die like the surrounding weeds. Today, 94% of all soybean acres, 91% of all cotton acres, and 90% of all corn acres are planted with herbicide-resistant seeds, the vast majority of which are specifically, but not solely, resistant to glyphosate. Of the 250 million pounds of glyphosate applied on farms in 2014, 80% was used on those three crops alone (Benbrook 2016).

Most farmers today rely heavily on herbicides and herbicide-resistant seeds to increase production and reduce costs. The Roundup package is one of the most commonly used by farmers, and glyphosate in general accounts for a majority of all herbicides used in agriculture. However, glyphosate has not contributed to increasing crop yields more than any other herbicide according to Dr. Timothy Griffin, Division Chair of the Agriculture, Food, and Environment Program at the Friedman School of Nutrition Science and Policy at Tufts University. “At the farm level, the impact of glyphosate is labor savings, which modestly increases profits,” he adds.

Contrary to popular belief, herbicides do provide some environmental benefits. The alternative, non-chemical method of weed-control is to till all the weeds with aggressive machinery, which is the major driver of soil loss and degradation on American farmland. With herbicides like glyphosate, farmers can instead practice soil conservation methods like no-till, which allows them to drastically reduce nutrient runoff that causes water eutrophication. By building up the nutrients in their soils, farmers ensure that future generations can continue to grow food on the same land.

As with all registered pesticides, the safety of glyphosate for humans and the environment must be re-evaluated every fifteen years. These evaluations are done by the U.S. Environmental Protection Agency (EPA) and the Federal Drug Administration (FDA). While both entities have claimed that glyphosate has low toxicity in humans, it is deemed minimally toxic to fish and wildlife and moderately toxic to birds. But in terms of glyphosate causing cancer, the EPA deemed it an unlikely carcinogen as recently as December 2017.

Once approved at the federal level, glyphosate products come with extensive information on each label regarding proper usage, re-entry periods, tolerance levels, and all other pertinent warnings. The claim that it has low toxicity to humans is made under the pretense that glyphosate is used “as directed” by these labels. Dr. Griffin, who has extensive on-farm fieldwork experience, including years as an agricultural extension agent, says that “for the crops in which glyphosate resistance is most prominent, the work at the farm level is almost entirely mechanized. This means that spraying is either from a piece of equipment pulled behind a tractor, usually with a cab, or a ‘spray-rig’ which is also enclosed.” Unlike Johnson and other workers who apply comparatively small amounts of herbicides by hand, most farmers are not likely to come into contact with glyphosate in the field. “Their safety is dependent on how they mix chemicals before spraying – this is the stage where the risk of acute exposure is highest,” Dr. Griffin adds.

As part of his case against Monsanto, Johnson claimed to have been exposed to levels of glyphosate above the tolerable limits due to leaks and equipment malfunctions over the years. The jury in his case ruled on the pretense of direct causation and blamed Monsanto for Johnson’s impending death, resulting in the $289 million settlement. However, Dr. Griffin argues that the link between glyphosate and non-Hodgkin’s lymphoma is “speculative,” adding that most of the current research has focused on correlative relationships that “are not particularly useful, especially without any plausible causation.”

So then why did a jury conclude that Johnson’s cancer was caused by glyphosate? One recent study found that glyphosate may in fact cause a host of illnesses, including cancer. The International Agency for Research on Cancer (IARC), an intergovernmental agency operating under the World Health Organization of the United Nations conducted a meta-analysis published in 2015 on the effects of glyphosate on human health. It concluded that glyphosate is a “probable carcinogen.” However, this IARC study is one of only a few to find associations between glyphosate and cancer. Some members of the scientific community have criticized the IARC report as skewed, incomplete, and contradictory, but the IARC maintains its confidence in the findings.

Despite the diametrically opposed conclusions regarding glyphosate’s association with cancer, 25 countries, more than half of them in Europe, either banned, restricted, or proposed restricting glyphosate in direct response to the IARC report. In addition, there are more than 50 U.S. cities and a few states that have invoked similar laws, which are often accompanied by Integrated Pest Management (IPM) plans that aim to reduce dependence on pesticides in public spaces, as happened in Boulder, Colorado as far back as 1993. But glyphosate bans aren’t just happening in GMO-fearing Europe and hippie-loving Boulder—cities throughout the corn belt have implemented restrictions or bans as well.

After the city of Dubuque, Iowa was “approached by a citizen group during the winter of 2015/16 that was concerned about the amount of Roundup we were spraying in our city parks,” says Steve Fehsal, the Park Division Manager for the City of Dubuque Leisure Services, “the city formed a committee comprised of city staff, members from the citizen group and some other community members.” This resulted in a city-wide IPM program that was formally adopted in June of 2016. Examples like Dubuque offer a middle ground for dealing with the uncertainty surrounding glyphosate’s safety by “allowing [local residents] to avoid pesticides if they choose,” Fehsal adds. Still, without further research, it is difficult to reconcile these overwhelming responses by national and city governments with the heavy scrutiny of the IARC report by the scientific community.

Even with more research, the truth is that glyphosate is not the only option. It is not the only compound that will kill weeds and reduce labor costs and prevent erosion and increase profits. But it is the only compound judged responsible for giving Johnson cancer. And his story is only one of thousands more like it appearing in courtrooms across the country. But, and it’s a big one, banning all uses of glyphosate, even if it were to be scientifically proven a carcinogen, will not guarantee the safety of those who use pesticides. If glyphosate is banned, another herbicide with perhaps a less robust history of safe usage and potentially more harmful (or at best unknown) environmental impacts might simply take its place in our parks and in our food. In fact, Nichole Linehan, the Integrated Pest Management Coordinator for Portland Parks and Recreation in Oregon says that “PP&R deems glyphosate-based herbicides one of the least toxic options available” when a pesticide must be used as a last resort.

Aside from glyphosate, there are two other well-known herbicides used for agricultural and non-agricultural purposes in the U.S. According to an EPA report, 70 million pounds of atrazine are used in agriculture every year, with application rates declining over time. Atrazine is one of the most common pollutants found in drinking water and is linked to sexual abnormalities in amphibians. Unlike glyphosate, atrazine is not approved for use in the EU for its high toxicity in aquatic life and its potential for causing organ damage and allergic skin reactions.

Another popular herbicide is 2,4-D, the infamous herbicide that was adapted from Agent Orange after the Vietnam War. Roughly 30 to 40 million pounds of 2,4-D were sprayed on crops in 2012, with application rates increasing over time. It is the most commonly used herbicide in homes and gardens, where seven to nine million pounds were sprayed in 2012, and the second most commonly used herbicide for industrial, commercial, and governmental purposes, which is the category that Johnson’s job falls under. When ingested by animals, 2,4-D can cause convulsions and birth defects in their young. It is also deemed very toxic for fish and other aquatic life and moderately toxic for birds. The National Pesticide Information Center even acknowledges that “some studies have suggested that there may be links between non-Hodgkin’s lymphoma and exposure to 2,4-D by itself,” which the NPIC does not mention for glyphosate.

But just because glyphosate is not the most harmful herbicide on the market doesn’t mean we shouldn’t try to limit our exposure to it if we’re still concerned that it might in fact end up making us terminally ill. Many of the cities that have restricted or banned glyphosate have done so in public spaces and schools. For example, Roundup use on all playgrounds is prohibited in Dubuque, Iowa and Fehsal adds that they now have 10 completely pesticide-free parks. These tend to be the places where risk of pesticide exposure is highest for children, who are more sensitive to their toxic effects. Portland Parks and Recreation conducted a trial on three public parks to assess the viability of banning all pesticides and found it was not economically feasible to do city-wide. However, those three parks remain pesticide-free “to give the public a choice to avoid all pesticides based on their beliefs,” says Linehan.

These restrictions are most feasible at the local level, which allows constituents and their representatives to make decisions based on their specific needs and concerns without navigating the bureaucracy of federal agencies. Banning or restricting glyphosate in public parks and schools will also not affect the farmers who rely on it to grow our food. If the doubt raised by the IARC report and the global response it inspired is enough to caution you against glyphosate, work with your representatives and community members to restrict its use in your public spaces. After all, isn’t it better to be safe than sorry?

Sam Jones is a second-year AFE student, the co-editor of The Friedman Sprout, and the Nutrition Communications Intern at 88 Acres. She is looking forward to having an entire month off over the holidays to be spent in Colorado and Hawaii with family. She plans on drinking all the wine and eating all the (Hula) pie.

0 comments on “In the Weeds: A Look at the Most Prevalent Pesticide in America”