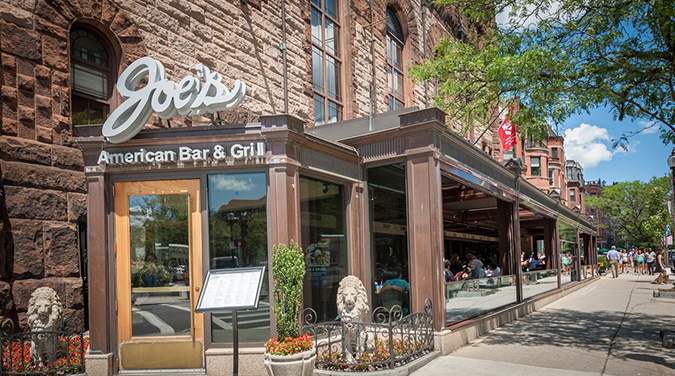 If you’ve ever walked down Newbury Street, you’ve probably passed by Joe’s American Bar and Grill without even noticing it. That’s because it’s the same as most of the restaurants on Newbury: loud and overflowing with tourists. You wouldn’t go there if you consider yourself a proper local. The day I happened upon Joe’s, I was decidedly not a local. I had just moved from New York City and into an apartment in the area that very morning.  My boyfriend and I decided to grab lunch. It was a beautiful day and we wanted to eat outside at a restaurant nearby. Joe’s was where we ended up.

Our server arrived shortly after we sat down, carting two comically large menus and two waters, grinning so hard it looked painful. He asked if we would like anything besides water to drink, and if we’d like some fresh bread. We feigned disinterest in the bread, but ultimately gave up the charade and decided to try it. Scanning the menu as we waited for our drinks, it was immediately apparent that a “light lunch” was a foreign concept at Joe’s.

Among the eleven appetizers offered were fried clams, buffalo chicken tenders, and “fully-loaded” nachos (my assumption here being that “fully-loaded” refers to how you will feel post-consumption of this dish). Moving on to soups and salads, the options ranged from standard, your menu staples of items like Caesar salad and New England clam chowder, to moderately intriguing, (what is a “spicy beef noodle” salad?) to healthier fare, such as the Tuscan kale & red quinoa salad.

The entrées made the indulgent appetizers look like the kid’s menu. Heavy-hitters such as short rib meatloaf, 5-cheese macaroni and cheese, shrimp scampi, filet mignon, and a variety of burgers and sandwiches. I’m all for meats and cheeses, but the meals I had seen servers whisking by did not suggest appropriate serving sizes of anything. To avoid being rolled home, I settled on the grilled Cobb salad, hold the cheese, dressing on the side. My boyfriend ordered the honey chicken salad.

While we waited for our food, the bread arrived, and I glanced over the menu once more. I realized that my initial assessment of the menu as just a long list of dishes of more than a thousand calories each was not entirely accurate. Joe’s offered a lettuce wrap swap for burger buns or sandwich bread and a side salad swap for the fries that came with most main courses, allowing diners the option of saving some calories. There were also a fair number of gluten-free items sprinkled throughout the menu—another potential attempt to appeal to a more health-conscious crowd.

The bread, I must say, was heavenly. It was truly fresh, or least left under a heat lamp powerful enough to convince me. It had a thick, crunchy crust and a fluffy, warm interior. The salads arrived shortly after and I was pleased to see that my Cobb salad, while quite large, had a reasonable amount of each topping. There was a dusting of bacon—enough to add flavor but not so much as to weigh down the salad and render it dense and chewy. The green apple was diced and evenly dispersed throughout, adding a touch of sweetness that complemented the savory elements. The chicken breast was grilled beautifully, with a charred exterior and juicy interior, and the single hard-boiled egg was done just right.

My boyfriend’s honey chicken salad, on the other hand, was an abomination. The chicken was more or less just an over-sized chicken tender, and the sesame noodles it promised were fried to a crisp. The dressing was thick and saccharine, more akin to syrup than to a light salad-topper. It was a reminder of just how deceiving salads can be when you’re doing your best to make healthy choices.

By and large, Joe’s is a perfectly acceptable establishment with better than decent food. Its healthfulness, however, is another story. For the sagacious restaurant-goer with the willpower to put half their entrée in a to-go box, Joe’s is navigable, offering just enough dishes that can be made healthy-ish with a few adaptations. For the less nutrition-savvy, Joe’s is a minefield of calorie bombs. Joe’s would do well to incorporate a few more low-calorie options, such as half-portions of sandwiches and pastas and light dressings.  At the very least, offering more nutrient-dense options, such as whole-grain bread or baked sweet potato fries would be appreciated. Ultimately, the name, “Joe’s American Bar and Grill,” should tell you exactly what to expect: American-sized dishes with American-sized calorie counts.

EJ Johnson is a first-year NICBC student and the social media editor for the Friedman Sprout. She loves to read, talk, and eat, so she ended up in nutrition communications. She is working on earning her RD and in her spare time loves to read fiction and travel, although lately less travel due to the whole “broke grad student” thing.