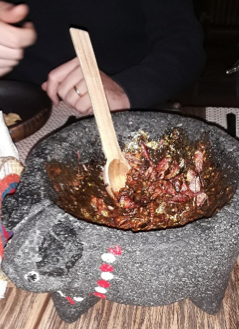 I inherited two things from my mother: her sense of humor and her fear of bugs. It is no surprise that when I was growing up insects were never part of my mom’s dinner menus, despite the fact that there are more than 500 species of edible insects in Mexico1. Since I was afraid of them, I always found comfort in thinking that I had never eaten bugs, and I never felt like an outsider even though my friends ate them occasionally.

I was 7 or 8 years old when I found out that my abuelita’s “special rice” was no rice at all. In retrospect though, it makes sense that my mother never ate it. My abuelita’s crumbly rice was actually a traditional recipe that contains ant larvae mixed with melted butter and epazote[a]. Despite having enjoyed that dish my entire childhood, learning the truth left me flabbergasted. I felt hurt and deceived. And I promised myself that I would never eat insects again. But life had other plans for me.

When I was 14 years old, my brother and I traveled to one of the coastal states in Mexico to visit some relatives. They received us with open arms and made a special dish to welcome us: chapulines’ tacos with lemon and salt. Chapulines are not-so-little grasshoppers that are fried and eaten with tortillas. To make the dish more appealing, the head and legs of the creatures are not removed. So, there I was, meeting some kind relatives, incapable of confessing I didn’t want to eat this dish, and half-listening to my brother as he encouraged me to try this delicacy. But it would have been very rude not to finish at least one taco. With sweaty palms and shaky fingers, I found myself reaching for a tortilla.  And I did it: I closed my eyes and I took one crunchy bite after another. To be honest, it wasn’t that bad.

Now, many years after that occurrence, I can say that I overcame my anxiousness: as I grew older, I became familiar with the variety of flavors that insects add to a dish. And now, I really miss my abuelita’s buttery “rice”.

For me, learning how to eat insects was an adventure; but for many indigenous communities in Mexico, it has always been part of their culture and identity2. Entomophagy, the exotic practice of eating bugs, was cherished among the Aztecs thousands of years ago1, and there are many pre-Hispanic cave paintings depicting how our ancestors ate beetles and worms1. Some populations have specific rituals for harvesting insects2, and there are special ceremonies to prepare dishes with them. As the undeniable link between diet and environment is discussed, it is worth looking at what those communities have to teach us about sustainable diets.

Nearly all varieties of insects can be consumed, either as human food or as feed for livestock3, which is one of the main reasons they are an attractive protein source for vulnerable and food-insecure populations2,4. Compared to other animal sources, 100g of insects are high in protein that is easier to digest5, and they provide some essential fatty acids, minerals such as phosphorus. Due to their exoskeleton, insects also contain significant amounts of fiber6. Additionally, food waste associated with insect consumption is less than from other animal sources4, mainly because for most insect species, all parts of the specimen are digestible. The Food and Agriculture Organization of the United Nations has identified insects as a sustainable alternative to livestock due to their low environmental impact2. If you are looking for ways to have a more sustainable diet, including insects as one of your protein sources is a very significant change you can make towards that end.

While eating insects in their natural form might not be appealing to all, blending and grinding them could also be an alternative to include them as part of other dishes. Some worm species are even used for obtaining natural pigments that are added to tortillas and other common foods3. At the local food markets in Mexico City, you can easily buy several types of ants, crickets, grasshoppers and worms. Furthermore, while visiting most traditional restaurants, you can try a wide variety of insects that are part of salads, entrées and desserts. Insects might not be such an exotic ingredient after all. Although it would be great if you wanted to visit this amazing city, you don’t have to travel far to try a few insects. Exo, Chapul and other brands sold at Whole Foods offer packaged seasoned crickets, cricket protein bars, and 100% cricket powder.

Like other dietary patterns, entomophagy is a journey. It may begin with a pinch of curiosity while visiting relatives, an interest in other cultures, or the desire to try alternative sources of protein that are friendlier to the environment. Whatever your motivation, eating insects opens a whole new world of textures and colorful food dishes. If you are beginning that journey, don’t be discouraged if you have sweaty palms and shaky fingers; it gets easier. And after a few tries, you will surprise yourself as you realize you are savoring a cracker with crickets.

Ana Maafs is a second year MS NICBC student. Originally from Mexico City, she worked as a nutritionist for a few years before coming to Boston. She is interested in behavior change at individual and community level. She enjoys having bubble tea from different places around Chinatown.

[a] A very common Mexican herb used for flavor.

0 comments on “Let’s not bug the planet: my experience learning how to eat insects (and why you should try it, too)”